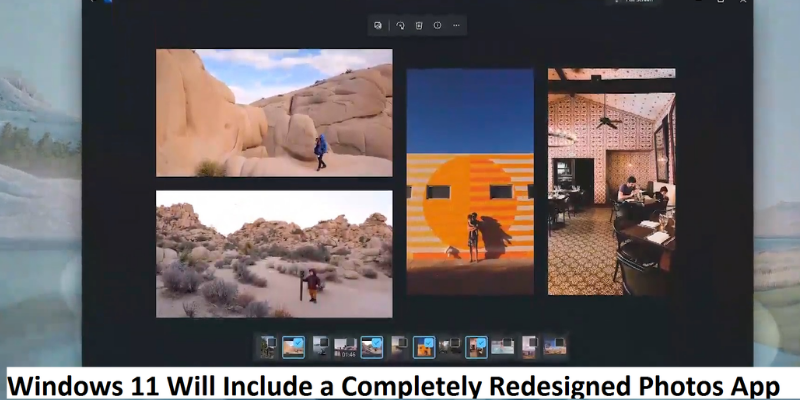 Panos Panay is Microsoft’s Chief Product Officer and has been teasing new features and a revamped appearance of many system apps as the company prepares to release Windows 11 public edition on October 5. Panay showed off the new Paint app in Windows 11 several weeks ago. He has now shared the first glimpse of the Window 11 Photo App.

Panay shared a tweet and a short video recently that showed the new Photos app, which will be available in Windows 11. The video shows some of the major design changes made by Microsoft to the Photos app. The tweet can be viewed below.

As you can see, this new Photos app is much more sophisticated and cleaner than the one that Windows 10 has. The upcoming Photos app will only show the image as it is, unlike the current Photos app. The additional UIs are available once you hover your mouse pointer over the image.

You will find a new carousel at the bottom which displays all your images. The new Photos app can display multiple images simultaneously by selecting them from the bottom bar.

The new version also adds a floating toolbar to the top-center of the Photos app. A new info button is also available that displays all details about an image in just one click. The new Photos app can display geotagging information on an image on the right side.

Panay stated that the new Photos app will soon be available for Windows Insiders. Insiders still need to see the updated Paint app that was shown earlier. We can therefore expect Microsoft to release both the updated apps and a future update through the Windows Insiders Dev channel.

The free upgrade to Windows 11 begins October 5 and will be phased and measured with a focus on quality. Based on the great lessons learned from Windows 10, we want to make sure that we give you the best possible experience  , ”Microsoft explained in a recent announcement.