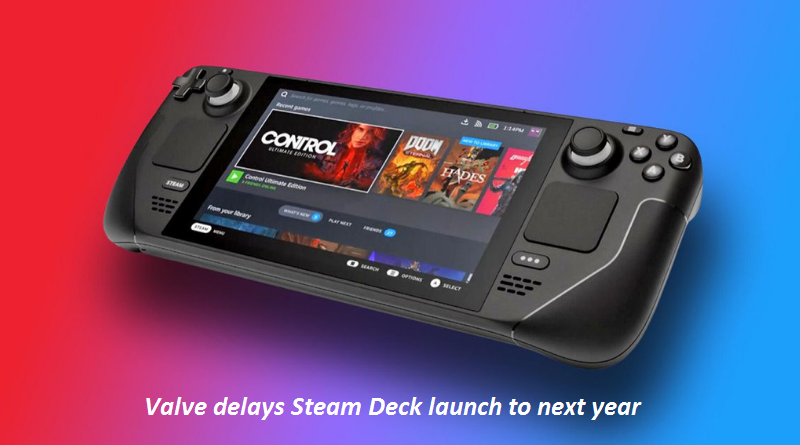 According to an email to those who had made reservations for the Steam Deck valve. It was not available until February 2022.

Valve sends an email apologizing for the delay. It cites global supply chain problems and material shortages. That has plagued both GPUs and consoles since the beginning of the COVID-19 pandemic.

The email to reservations said that “Due to material shortages components aren’t arriving on time at the manufacturing facilities so we can meet our original launch date”. However, the email did not include information for people who want to buy a Steam Deck but are not able to reserve one. The console’s availability date will likely be delayed due to current global supply chain disruptions as well as issues with parts sourcing, manufacturing, and other issues.

All models of Steam Deck are affected by the issue, which was expected to start shipping in December.

Although Valve states that the February 2022 date is an estimate. It seems like the company is still optimistic about the new date. Steam Deck customers who have already booked will be kept in the queue. But their dates will “be shifted accordingly” to begin in February instead of 2022.

Everyone is Affected By a Shortage

The Steam Deck was first announced by Valve in July. Although the Steam Deck’s design and form have been compared with the Nintendo Switch’s, Valve envisions the Steam Deck as more of a laptop-sized PC. Gamers will have full access to their Steam games library wherever they go. They can also use the Stream Deck’s built-in controller to play with the console or plug it into a TV to display the game on a screen. You can see it all.

The Tech industry has suffered from the shortage of global supply chains. NVIDIA 30-series graphics card cards and next-generation consoles have been difficult to find for almost a year. BMW last week said that some new cars won’t have touch screens because of a shortage of chips. Even Apple felt the pinch last quarter, reporting that it had lost $ 6 billion due to supply chain constraints.