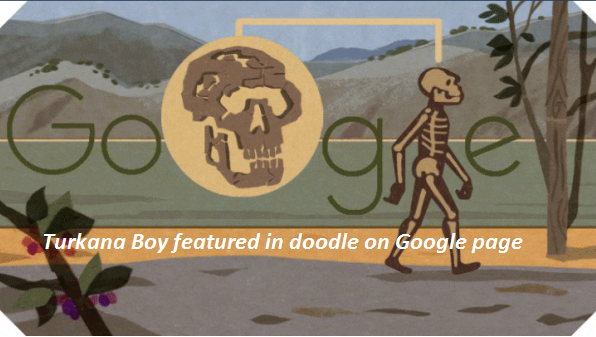 This Sunday, August 1, Google is celebrating with a doodle the anniversary of the discovery of the Turkana Boy or Nariokotome Boy, a nickname given to him after his discovery at the Nariokotome site near Lake Turkana (Kenya).

For the occasion, Google opted for a simple, lively design, which shows the Boy from Turkana walking through prehistoric land, while one of the letters in the search engine logo recreates the fossil’s skull.
Discovered by Kenyan Kamoya Kimeu in August 1984, one of the world’s most famous fossil collectors, Homo ergaster, the species to which Turkana man belongs, set foot on the earth about 1.6 years ago. million years old (early Pleistocene) and is estimated to be 11 to 12 years old when he died.

The fossil, which measures 160 centimeters, has most of its bones intact, except for its hands and feet. It is estimated that in adulthood, this specimen could have reached a height of 185 centimeters or even more.

However, the causes of the Turkana Boy’s death are varied, most scientists have concluded that his death was due to sepsis caused by an infection of one of his molars. But, others believe that the reasons are due to severe scoliosis or lower back problems.