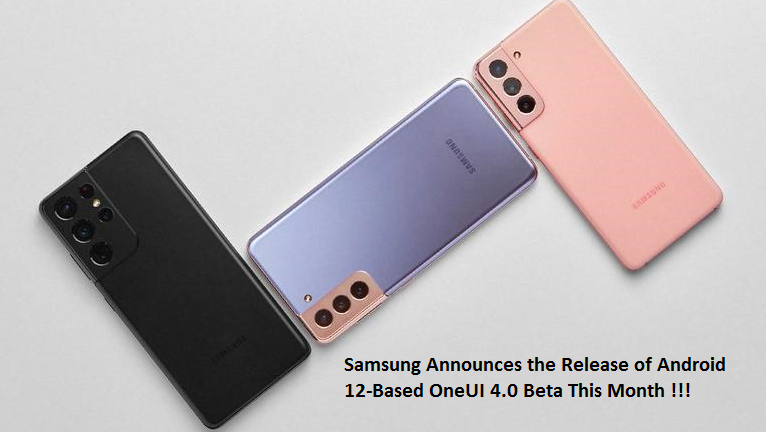 We learned a few days ago that Samsung would soon launch the beta version of One UI 4. Manufacturers like Samsung and OnePlus are hard at work to create and finalize their own versions. Android 12 is getting closer to being officially released. they will use the new operating system on their flagship devices.

Samsung has now confirmed that One UI 4 beta 1 based on Android 12 will launch this month.

The South Korean giant Samsung posted the information on its official community forums. It stated that the next version of the operating systems is nearing deployment. You can join the beta program if you’re in Korea by tapping the “Join One UI Beta Program” banner in the Samsung Members App. Although the beta program has not been announced for other regions yet, it will be soon.

Samsung has not yet confirmed whether the beta will go public, but the company has stated that it will work with devices sold by carriers. The next beta of One UI 4 is expected to be available on flagship devices Galaxy S21 and S21 + as well as the Galaxy S21 Ultra.

Android manufacturers take longer to update their overlays than Apple, which releases its latest operating system to all iPhones immediately. Samsung raised the bar by announcing that Android 12’s first beta will be available in September. It’s still ahead of schedule, even though there is no specific release date.

Android 12 will be released in the coming weeks. It has already achieved platform stability thanks to its Beta 4 update, which was released two weeks ago. Now that the new behavior and APIs have been finalized it is up to the Android team and Google to decide when they will push the button to officially deploy it.

One UI 4.0 will make a few improvements to the interface. These include new icons, new colors, and Material You elements throughout. The new One UI should also be less cluttered with ads. This new version will include many optimizations, particularly for Exynos 2100 and Snapdragon 888 chips.

Is One UI 4 exciting to you? What do you think the combination of Samsung’s One UI design with Android 12’s new Material You design will look like?