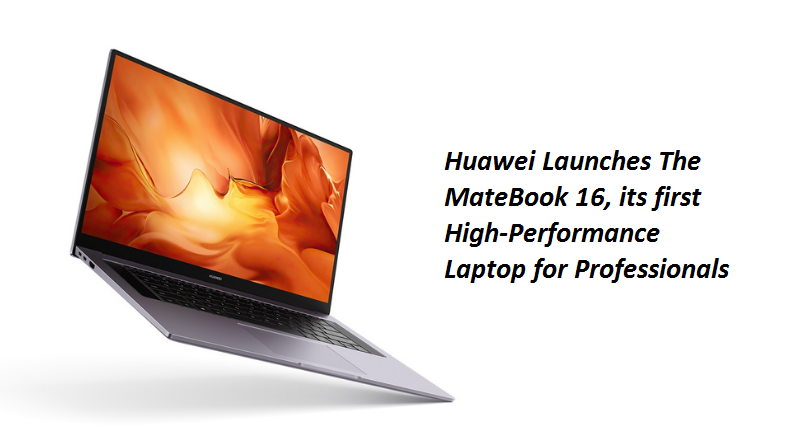 This week, Huawei unveiled its MateBook 16 laptop. Huawei says this is its very first high-performance computer “  designed to unleash big ideas  ”. Not only does it follow the aesthetic design of the MateBook range. But it also comes with a professional-grade FullView display, powerful internals, and collaboration features that bring “best ideas” to life.

The MateBook 16’s 16-inch display is made for productivity and creative work, Huawei says. The 16-inch FullView touchscreen supports a resolution of up to 2.5K and is TÜV Rheinland certified for color accuracy and fast stability that enables the screen to produce colors truer than nature. It benefits from a screen-to-body ratio of 90%. It can display up to 1.07 billion colors on 100% of the sRGB color gamut, allowing for basic professional work. The company claims that every MateBook 16 device is factory calibrated to achieve an average professional color accuracy rating of ΔE = 1. In addition, the laptop has low blue light emissions and no flicker,

The MateBook 16 is equipped with an AMD Ryzen Series processor. It comes in two variations: one with an AMD Ryzen 7 5800H chip and the other with an AMD Ryzen 5 5600H chip. The onboard GPU is AMD’s Radeon graphics processor. The AMD processor is paired with a high-performance solid-state drive “  which requires the support of traditional office scenarios, such as office work, design, and development  .”

The laptop has an 84 Wh battery. It comes with a 135W power adapter which boasts of Huawei’s fast charging. Huawei claims the MateBook 16 can last up to 3.5 hours on a 15-minute charge. In terms of connectivity, the Huawei MateBook 16 has two USB 3.2 Gen1 ports, two USB C ports, an HDMI port, and a 3.5mm headphone jack.

In order to make the best use of the powerful internal components. Huawei has incorporated numerous collaboration functions into the MateBook 16. PC-Smartphone multi-screen collaboration allows users to project their smartphone screen onto the PC screen. ‘one-touch and control two devices at the same time on one screen. In addition, the laptop can connect to Huawei tablets, monitors, and audio products seamlessly.

For example, the laptop can connect to the Huawei MatePad Pro to serve as a drawing tablet for spontaneous user sketches. Or can be used as a second screen to accommodate more windows for multitasking. It can also be connected to the company’s MateView and FreeBuds.

Other features of the MateBook 16 include a fingerprint power button, dual-antenna Wi-Fi 6 for high speed, among others. It has a “full size” backlit keyboard and a dual front speaker. Huawei has also made efforts to improve video calling by adding AI noise reduction to onboard microphones. Huawei says the laptop has a long-range sound pickup, up to 5 meters, which provides “  remarkable voice clarity during calls and video conferences  .”