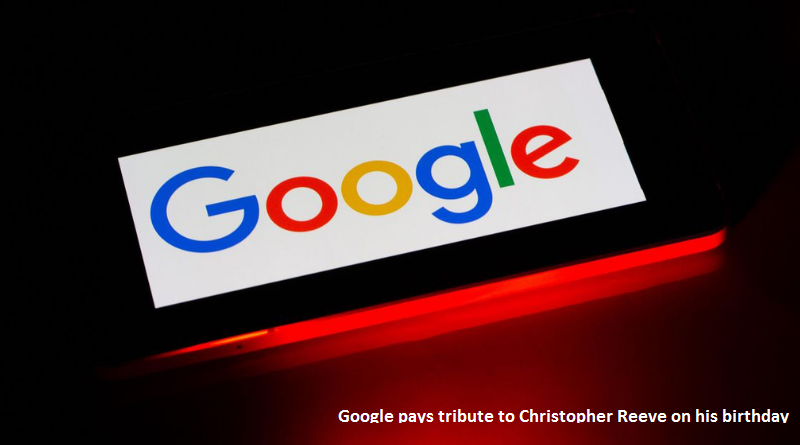 Google paid tribute to Christopher Reeve on what would have been his 69th birthday. The Doodle of this Saturday, September 25 is devoted to the actor, the director, and the humanitarian.

Christopher Reeve is best remembered for his flights across the screen while wearing a red cape and a giant S on his chest. But it was his offscreen job when he hoped he could walk again, that made him a hero.

His sensitive take on Superman helped turn the 1978 film into a blockbuster. That paved the way for a wave of superhero films. Years later, after a horseback riding accident that left him paralyzed. He used his star power to raise awareness about people with disabilities. From all angles, he was a hero to millions of people.

After performing for 2 years in plays and soap operas, Reeve auditions for the role of Superman, beating over 200 other actors. With his dark hair, piercing blue eyes, and chiseled face, Reeve, who stands six feet tall, is the very image of Superman in this big-budget movie. He would reprise the role in three sequels during the 1980s, proving there was an appetite for superhero movies and paving the way. Later in the decade, to the big Batman movie starring Michael Keaton and, ultimately, at the Marvel Cinematic Universe.

Although he’s starred in dozens of other films. He’s mostly associated with his interpretations of Superman, and for millions of moviegoers, he was Superman.

A Fight Against Disability

It became the case for millions more after a horseback riding accident in 1995 left Reeve paralyzed from the neck down. Even though doctors consider this injury one of the worst possible. Google tribute to Christopher Reeve shows courage, redefining expectations. About a quadriplegic’s abilities and he promises to walk again one day.

After his accident, Reeve became a powerful advocate for people with disabilities. And increased funding for medical research. With his wife, he founded the Christopher & Dana Reeve Foundation. An organization dedicated to healing spinal cord injuries by advancing research. He lobbied Congress to expand embryonic stem cell research, arguing that this was the best chance to give him and others like him a chance for recovery.

In 2004, after a fight of nearly ten years, Reeve suffered cardiac arrest and fell into a coma before dying. He was 52 years old.