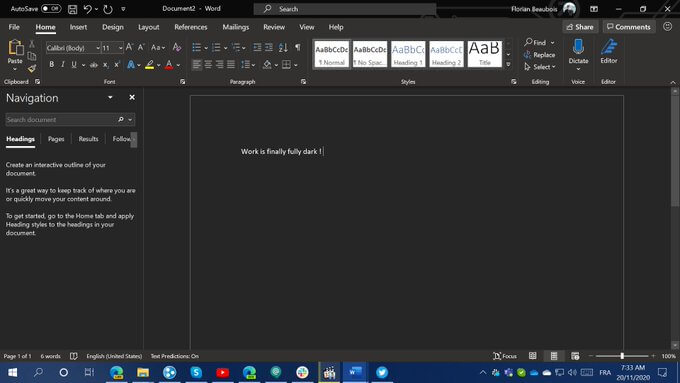 Let’s face it, dark modes are the new hype, and Microsoft knows it very well. This is the reason why the software giant has already added a dark theme to Windows 10, and now the company is working around the clock on adding similar updates to its other apps.

The next vying for dark mode is none other than Microsoft Word. Florian B. has already spotted an update to this visual style that is available to some members of the Insider program.

Microsoft itself has been very quiet about this update, although judging from the screenshot posted to Twitter, the new dark mode covered the entire app UI, the font itself turning white. This is because as you can see in the screenshot above, the new dark mode now applies to all areas, including the document area (empty section of a Word where you type words) and the search box.

This new look is more pleasing to the eye and helps make menu and tablet items stand out.

It’s worth pointing out that this feature would only be available for the desktop version of Microsoft Word, although eventually, Microsoft wants to bring the same visual style to all platforms for a bit more consistency.

Microsoft is fully committed to keeping all of its products up to date, and these include not only desktop software but also mobile applications available on Android and iPhone.

Earlier this month, Microsoft was one of the first companies to announce a new version of Microsoft Office that would be specifically optimized for Apple Silicon, not least because devices with the Apple M1 chip are already available for purchase.

Additionally, Microsoft is also working on releasing an M1 version of Microsoft Edge, the company’s new browser that works with the Chromium engine.

All in all, Microsoft has been preparing a lot of updates lately, which shows that after all, the Redmond giant remains the world number one in terms of software. It’s not yet clear when exactly some of these updates are supposed to go live, as Microsoft has been very tight-lipped about them.